The last week started with an ambulance ride and ended with so many of us praying. Here’s what happened.

After arriving at the hospital on Monday Bede started to deteriorate on Tuesday night and we started to worry that we were losing Bede.

He was fighting a winnable battle but he was exhausted and he was coming from behind. He was more tired than we had ever seen him and just breathing was hard work. For the first time ever he was finding it difficult to shine through and that was devastating.

I sent a message to our family and friends recruiting love and positivity but even as I sent it I knew one part wasn’t true. “there must be more to come”. I realised he had filled us up, his light has shone bright and he has been more than enough for our family. That scared me even more. Perhaps it was time. 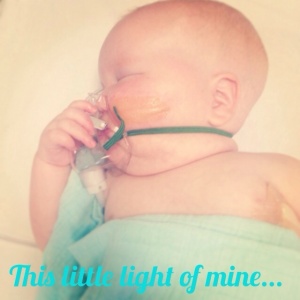 My gut told me it was line ball and we were in trouble. The doctors agreed it wasn’t good and we may lose him. Bede fought valiantly but I was losing my boy.

Come Wednesday afternoon I asked for a moment alone with Bede. I whispered in his ear that I loved him. I sat by his cot holding his hand and told him the truth. I told him he is magnificent and that he had exceeded all expectation. I told him he had made me happier and given me more than I could have ever asked or hoped for. I told him he had done enough now and if he was tired and if he wanted to go that was ok, he could. He had given us more than I could have ever hoped and if he chose to stay around for a while it could be our turn to give back to him but whatever he chose was ok.

ICU came and gave him more supportive measures. My incredible husband Roy describes it as “he was standing on the edge of the cliff but not looking down”. We were maxed out. Any more support meant we would have to be transferred off the ward to ICU; he would need to be anaesthetized and ventilated. We needed to consider what our wishes were for Bede. Our primary doctor one of Bede’s biggest advocates said that should the time come we ventilate. For now we fight and that made sense because he was still fighting to. She acknowledged we were in a bad place but told me she still had faith in him. We both decided it was time to get Gus in to see Bede just in case. Gus brought unconditional healing love into the room and sat by Bede as I held him and Gus read to him for a while. Then overnight what has become almost the ordinary happened. Bede put his head down and one foot in front of the other and he worked. Slowly but surely he reclaimed himself. He shined again.

We had about  24 hours of peace. Bede remained maxed out but we suspected he was able to progress and were just giving him a chance to rest. Then it all turned again.

Bede’s body writhed and thrashed uncontrollably. He screamed in distress.

We kept pumping him full of an array of IV drugs to try and stop it but nothing worked. ICU came down and spoke to us about the possibility of anaesthetizing him and ventilating him until hopefully this episode passed. We were now losing him again but in a completely different way.

The on call consultant who knows Bede well talked to me on the phone at 4am. He said it was time to stop the drugs, they weren’t working. There was nothing we could do to make him comfortable. It was time for us to just hold him through it. That was the hardest thing I have ever done and late that sleepless night I wrote this:

I have always said Bede’s resistance to cancer was much like a peaceful protest, his gentle strength forging the way.
Tonight it’s all out war. It is violent. He is in the trenches. He is fighting a messy, dirty battle and he is doing it with grit and determination.

It almost reminds me of a shark feeding frenzy. The waters obscured by the movement, frantic, fast. His limbs are flailing his back arching, he’s cycling through uncontrollable movement and agitation before managing to ground himself for just a moment before the next round. It is unrelenting.
I’ve never liked the word fighter for Bede, I’ve always found it too abrasive for his gentle soul but tonight he is fighting for his peace, for his light, for his life. Refusing to be taken easily, refusing to leave his big brother just yet, refusing to be robbed of what he has rightfully earnt – some time off treatment by the beach enjoying life.

It was pretty accepted that Bede wasn’t aware of us at that point but I refused to believe I couldn’t reach my baby on some level. I spent the night trying to pour love into him so in the midst of his despair he wouldn’t feel alone. It took every ounce of my being to smile as I sung “this little light of mine” my voice shook and my mouth trembled but I smiled and I sung and I tried to fill him with positivity and love and so did his daddy. I think we all found out just how hard we can fight that night.

Even in the depths of his despair, as he thrashed and wailed, he paused. He became Bede. He looked at me and he smiled, his light shining brilliantly, dazzling until seconds later he succumbed again. He took a moment to remind us just how hard he can fight, to remind us it takes a bit more than this kind of horror to keep him down. As he thrashed his light was dimmed but unassailable he glowed. His gentle loving soul fortifying us reminding us to be peaceful be patient.

On Friday morning after 12 brutal hours neurology saw us. It wasn’t seizures. He was aware of us he just couldn’t show us that. The movements were coming from a different part of the brain and were not sure why it’s happening. Finally early yesterday afternoon we got it under control. A lot of those measures have a sedative effect so he is catching up on his rest.

Now he sleeps. His vital signs, his heart rate, his oxygen, his respiratory rate are all good. We have managed to do a miniscule reduction in the support from ICU, it is a reduction nonetheless and soon we will start him on a tiny feed of 5 mls an hour. It will be the first time his body has had food since early Monday morning.

Today he gently tip toed his fingers across my own, he smiled gently but purposefully. He is resilient.

Last night Bede’s aunt came and played the guitar and serenaded him. Her chords permeated his upset and he relaxed. She played all his favourite songs and created a few new favourites. She helped me help him resist drifting back into despair and helped us give him some sweetness.

If we didn’t know already over the last few days we have found out what our son is made of.

Bede is weakened but he is not diminished, his strength incontestable, his light indelible. His soul glistens with hope and love and beauty and light and joy. He is a blessing in its purest form.

Although it is not perfectly apt it reminds me of a quote that I came across some time ago.

So yes the fight is hard, the cancer is dark and Bede is soft and glowing and tender and I feel like that is just what he needs to be. It is not fair and it is not right and this did not “happen for a reason”. It stinks but if there were ever a baby up to the challenge you better believe it is Bede. His soft beautiful love, his gentle soul, his resilient tenderness and his purposeful persistence have him in with a fighting chance and for this fight I’m backing Bede. Cancer ain’t seen nothing yet.

I want to add a thanks to all the nurses who have surrounded him and us with genuine care this admission and who have prayed for him. Who have made us feel like Bede matters and is valued even in this environment that he is more than just a number on the ward that he is cared for. I want to thank everyone who has sent him love and positivity this past week. From virtual strangers to our nearest and dearest thank you. Your love strengthens him and us and enables him to work his magic.

Bede has been remarkable.

If he chooses to go it is ok. He has done enough and I have tried to be enough. Mothering him has been a privilege. I have tried to empower him to make his mark through this blog and through all of you. If he chooses to stay that would be a dream but if he chooses to go I hope you will help me to wrap him up in love and tenderness and light and joy and soulful kindness. In the meantime, while we wait, I hope you will help me fortify him with love and positivity as his light has so often fortified me for the fight.

As I nuzzle my head against his own I am at home in the world and I count my blessings.

(I did a photo post earlier today showing some of the last 6 weeks including our happier times and times of growth and joy. you can check it out here)