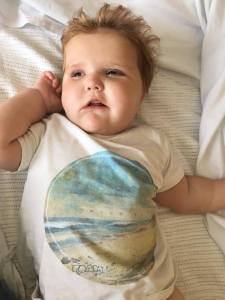 And so he died as he lived with strength, dignity, grace, shining his light and in the arms of those that loved him the most.
He was signing for ‘more’ and smiling almost until the very end.
Good naturedly defiant, triumphant. He did it his way.
He stayed true… A peaceful protest wrapped in warmth.

Bede was called into hospital last week when, as he smiled and laughed and attended rehab, we got the news his blood sodium was so high it would send a grown man into a coma. He continued to live on his terms. A few days into the admission, despite brain scans showing no acute change, we got the sense it was time to take our boy home. The doctors supported us but were also backing him to turn it around as he had done spectacularly so many times before.

We made it back to his happy place just in time on Tuesday. He died in the early hours of the next morning.

As one of Bede’s long term doctors put it “It almost sounds like the way its meant to be: On his terms, in his time, at his place, with his people.”

12 days ago Bede was making pizza, smiling, attending kindy, hanging with his brother and sister, living the best quality of life we could have ever hoped for. Roy says it feels a bit like he was on a train and simply thought “Yep. This is my stop, time to hop off.” Simple as that. Whatever it was Bede once again outwitted brain cancer to do it his way.

A gentle soul with a cheeky sense of humour. Determined to have the peace he so richly deserved. There was none of the pain or agitation we feared for him. Love won.

There was no raging against the dying of the light.
Just a miraculous boy who shines on into the night.

Bede you remain the wonder that is keeping the stars apart.
I carry your heart with me, We carry you in our hearts.

—
This news being delivered by blog and social media reflects the incredible number of incredible people that love Bede. It is an overwhelming task to inform you all in a way that does justice to the friendships Bede has cultivated. Please forgive us as we focus on caring for our three children. Details of his service on Wednesday will come in time.