I’ve gone back to uni. In the hope of completing my degree and Bede hanging around long enough for me to be able to afford all the services I wish for him. 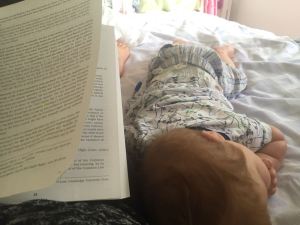 Bede’s been helping me study.

One of the units I’m studying has a strong emphasis on human biology.
Everything featured in the first lecture on that aspect of the unit related to Bede.
The tentacle like villi that line the gut, the sympathetic and para sympathetic nervous systems, the thyroid, the structure of bones, the grey matter of the brain, the list went on.
Then we moved to the lab and I started looking at some of these things under a microscope. 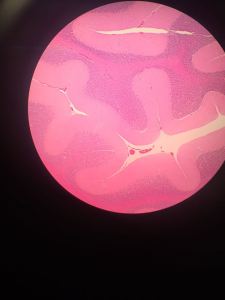 Cellular structures, as pretty as art.

It really hit me that Bede’s body is failing him on the most basic, fundamental levels. That if we are the sum of our parts Bede is crumbling from within.
No wonder he has been crying so much, no wonder at times the fight has felt so insurmountable.

So what is it that has been sewing him together? His light, our love, your hope?
If our bodies are poetry in motion, cells signing to one another, are life’s intangibles threading Bede back together into the now.

If it is all those beautiful intangibles then how strong is that thread?
I’m not sure. But nonetheless here he is.

Resourceful as ever. Rebuilding himself from within and reinventing himself yet again. Shining his light and his resolve and his unconditional love.

So that even as we fall, as we fail, as we falter, Bede pulls us up and reminds us we are more than the mere sum of our parts. We are whatever we each choose to be.

Bede’s symptoms have been intensifying but he chooses not to bow to them. Just as we feel as though it is time to surrender to the thought that he may be deteriorating he regroups, he dominates at life.

So tomorrow we go into the next MRI. Brought forward in response to his ever increasing upset.

Maybe that’s it after all. Maybe Bede’s presence isn’t in spite of his body’s failings but due to the stubborn, loving, determination that body has generated.

Because at each moment he has chosen us. As I once again hold him before he goes under and repeat those well worn words “you are strong, you are loved, you are important” we will choose him. With every last ounce of strength. For now and forever.

But we are preparing ourselves for the reality that the choice might not be ours for the making.

So as he heads into the scanner yet again we hope you’ll join us in hoping, praying, wishing for whatever is best for Bede.
He may be small, but he is mighty.

24 thoughts on “The Biology of Bede.”

If you leave a comment for us or Bede we'll make sure to read it! Thanks for following Bede, we appreciate each and every one of you. Cancel reply